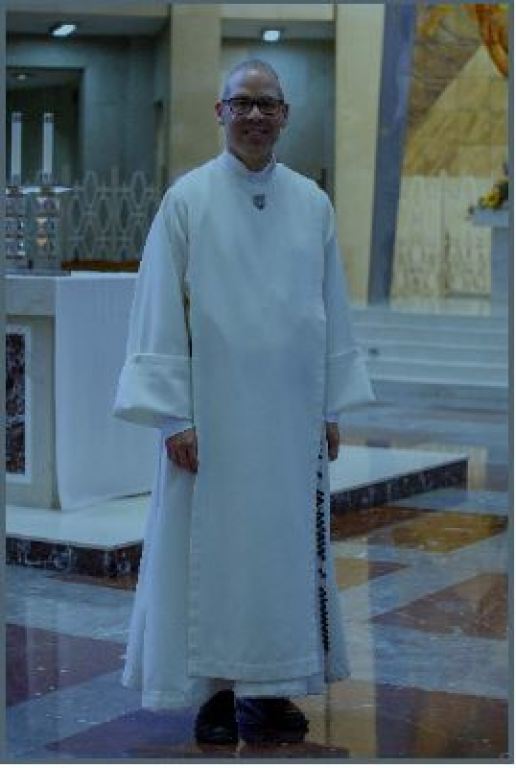 It was announced on September 18th at the Vatican that His Holiness Pope Francis has appointed as Auxiliary Bishop of Hartford the Reverend Juan Miguel Betancourt Torres, SEMV, assigning him the Titular See of Curzola. Archbishop Leonard P. Blair shared this announcement with his archdiocesan staff at 10 a.m. on September 18th.
A video recap of the announcement can be viewed here.

The Bishop-elect was ordained a priest on April 21, 2001. He currently serves on the faculty of The St. Paul Seminary School of Divinity in St. Paul, Minnesota, as Vice Rector of Formation, Associate Academic Dean and Assistant Professor of Sacred Scripture. He is also the Pastor of the Church of St. Francis de Sales of St. Paul in St. Paul, Minnesota.  “I feel honored and very grateful for the Lord’s call to serve with all my heart the people of the Archdiocese of Hartford, under the pastoral and fatherly care of Archbishop Leonard P. Blair,” Bishop-elect Betancourt said in advance of the announcement.

Bishop-elect Betancourt is a member of the Society of the Servants of the Eucharist and Mary (Esclavos de la Eucaristia y de Maria Virgen), which he joined after graduation from college. He presently serves as Vicar General of the community. It is a contemplative community founded in Puerto Rico, centered on Eucharistic adoration and Marian consecration, and is part of the International Schoenstatt Movement.

Born in Ponce, Puerto Rico, in 1970, the Bishop-elect is the son of Miguel and Gloria Betancourt, and the older brother of sisters: Gloria and Glorimar. He is a graduate of the University of Puerto Rico with a Bachelor in Natural Sciences, and received a Master of Divinity degree from the Pontifical Catholic University of Puerto Rico in Ponce.  Following his priestly ordination, he earned a Licentiate (S.S.L.) in Sacred Scripture from the Pontifical Biblical
Institute in Rome.

The Bishop-elect has served on the Presbyteral Council of the Archdiocese of St. Paul and Minneapolis, and as a Board member of the National Conference for Seminarians in Hispanic Ministry. His professional experience also includes teaching at the University of St. Thomas and in the Diaconate Program for the Archdiocese of St. Paul Minneapolis, and at the major seminary, Regina Cleri and the Pontifical University in Ponce, Puerto Rico.  In making public the appointment of Father Betancourt, Archbishop Blair of Hartford said that: “Coming as it does on the eve of the 175th anniversary of the Archdiocese in November, the appointment of Father Betancourt is a cause of rejoicing not only for me personally, but for all our clergy, religious and laity. For me and for our clergy it means the welcome arrival of a dedicated co-worker in the Lord’s vineyard who brings a variety of talents and of experience to our shared ministry. For the laity of the Archdiocese in all its present-day diversity, Fr. Betancourt’s Hispanic/Latino heritage will only enhance the pastoral care that he will exercise for the good of everyone of every race and ethnicity. For those in religious life, Fr. Betancourt’s membership in the Society of the Servants of the Eucharist and Mary only serves to underscore the value and contribution that consecrated religious men and women make to the good of the church.”

All are invited to participate in his Episcopal Ordination on Thursday, October 18, at 2 p.m. at the Cathedral of St.
Joseph, 140 Farmington Avenue, Hartford, CT 06105.